In case you are currently using any 3rd party repositories, like xorg-edgers or ubuntu-x, it is recommended to remove them from your system as to avoid unexpected situations. Also, If you have used our uXeye script to install your nvidia GPU drivers, then you have to uninstall them before proceeding the upgrade; otherwise, there will be problems that no-one but an experienced Linux user can tackle with. Let me show you how to do it.

Open Ubuntu Software Center > Edit menu > Software Sources > Other Software Tab    and un- check all 3rd party (including launchpad) repositories. To change software settings you need to authenticate first by typing root’s password when it’s prompted. Take a look to the screenshot below: 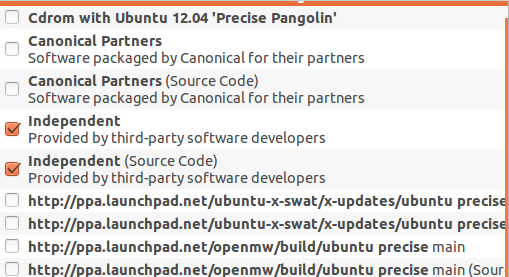 Once you have PPAs unchecked, update your system. Simply put, this might be more of an downgrade your current packages to Ubuntu’s 12.04 default version. Open a Terminal and type:

If you are not using the open source driver but the closed (proprietary version) ones, you need to have the removed from your system in order to successfully upgrade into Ubuntu 12.10. After all,  no-one wants to have their all-new Ubuntu 12.10 crashed, so driver-wise, please make sure that you have X-Swat/Xorg-Edgers disabled (see the previous step 1). That has been told, UbuntuXtreme is not responsible for any NVIDIA API mismatch, ending up with a different kernel nVIDIA module in contrast with all NVIDIA driver components. That’s why you need to remove any proprietary driver and 3rd party repository before applying the Ubuntu 12.10 update.

Personally, I own a GeForce GTX465, thus I am going to use uXeye script to complete remove 304.60 drivers. In case you are using AMD GPU, please refer to unofficial AMD Linux Community *btw soon enough I will include AMD into uXeye scrip too, but for the time being you’re on your own. So fire up the uXeye and select the 3rd option.

Step 3: Notify for any new version

Ubuntu 12.04, the release prior to today’s, was a Long Term Support release (meaning that it is supported with bug fixes and security updates for 5 years) you won’t find a pop telling you that a new version is available. Let’s fix this.

Once you have altered the notification rule, you are able to proceed. Open Update Manager (via Dash) and click Upgrade Ubuntu 12.10 button.

During installation you might get some strange messages regarding your GPU. This is caused due to open source nouveau drivers, missing the 3D acceleration support. Just skip the messages or click Yes.

Ignore the messages and proceed with the installation. Make sure you have all the programs closed or you will get a warning like this: 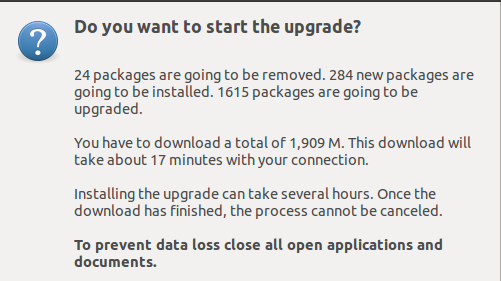 Ok now you are able to finish the upgrade….Ubuntu 12.10 has just been released, so you won’t be the only person upgrading. With this in mind be prepared for the upgrade to take longer than usual to complete. 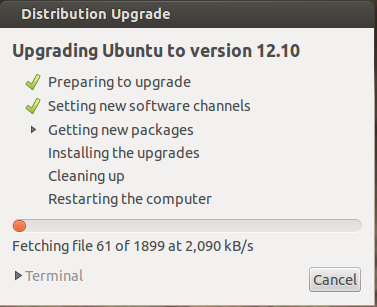 Do also remember that Ubuntu 12.04 is general more stable than later releases because of its LTS tag. If your productivity depends on general stability more than slick Unity Previews and some updated apps, hold off on upgrading for now.

Do not forget to re-install your GPU drivers

This site uses Akismet to reduce spam. Learn how your comment data is processed.